GEF Dialogue on TerrAfrica facilitated by World Bank on: “African countries’ experience and emerging priorities under the TerrAfrica partnership to promote interventions at scale against land degradation” Panel experts highlighted experiences and success stories of TerrAfrica in ten year period of implementation.

They recall that TerrAfrica was launched, first, to offer a platform for development partners of Sub-saharian countries to harmonize their support to fight against desertification in Sahelian countries. From 15 country members at its launch, TerrAfrica counts today 30 members, this is attested in its success. TerrAfrica moved forwardto be an active and inclusive platformwhich the main objective is tosupport implementation of UNCCD,CAADP, NEPAD African environmental program.

Today, DLDD and SLM are at the top-level priorities in African agenda. However, they are still challenges to scale up SLM good practices and to achieve integration, breaking silos between capacities and skills, to improve science based-evidence and to take stock on all experiences and lessons learnt.

The role of civil society in TerrAfrica implementation is notably to reduce gap between policies and people on the ground particularly in rural area. Territories have to be at the heart of activities’ design to ensure that they benefit local people. CSOs’ involvement in TerrAfrica activities is crucial to sensitive, and to upscale the results and value experiences. Experience with BRICKS and SAWAP initiatives were highlighted as an example of what could be done to involve CSOs, corporates and local governments.

Financing opportunities from EU were presented, and countries are invited to consider. More coordination at country level between EU initiatives like the Emerging trust fund (resilience), financial investment facilities, etc.

Finally, TerrAfrica has to build on its experiences, lessons learnt, and the spirit of the past years. It needs to value its big potential, and to gain from all energy and interest. It’s time to move forward, to adapt to new environment in order to meet new expectative of its country members facing new challenges in achieving LDN.

Turkish delegation visited the CSOs during a coordination meeting. Head of Directory of Turkey’s Combating Erosion and Desertification, Mr Hanifi Avcı pledged continued financial support for CSOs as part of Turkey’s Ankara Initiative. Funding will be provided to CSOs for their work on gender and land tenure security.

While answering the questions about land rights asked by a CSO representative, Mr Avcı assured the CSOs that the Turkish Government will be happy to support the CSOs. He stated that they would consider any proposal submitted by the CSO community.

On a question relating to the role of CSOs in the Strategic Framework, Mr Avcı reflected on CSO’s concern that the framework does not mention CSOs explicitly in its current text. He probed the possibility of opening it for further negotiations, which could allow addition of new text on CSOs.

On the issue of involvement of younger generation in the implementation of the convention Mr Avcı underlined that the first youth forum was organized in Ankara during COP12 and they continue to support the participation of young people in the Convention.

In Burkina Faso, most of anthropogenic causes of land degradation are linked to poverty and illiteracy, mainly in rural areas. According to the Ministry of Environment, the country loses, each year, around 100 000 hectares of land, over a total area of more than 27 million hectares. The situation is therefore alarming.

The Association for the Protection of Environment and the Sustainable Development (APEDR) focuses its work on human and sustainable development by implementing an efficient support to rural population. Combating desertification and land degradation relies on adopting of agricultural and cattle breeding good practices. It also contributes population’s adaptation to climate change, for which APEDR promotes actions of reforesting, assisted natural regenerating, or building and protecting water reservoirs. Within these actions, APEDR accepts students from Burkina Faso agronomic schools during their final studies internships.

The work they do shows the importance of mechanical work on soils and of organic manure use. Students also implement testing fields and demonstration plots to sensitize populations to technical itineraries to different gardening speculations. In the concerned areas, producers note the different techniques effects on plants evolution and crop efficiency, in order to replicate these techniques within their fields.

At the end of their internships, students move towards public functions and civil society organizations active within rural development. Some of them are even recruited by APEDR as facilitators.

Mentoring interns allows consequently to highlight and to arouse vocations in the field of sustainable land management for the youth, while strengthening their awareness as well as the one of rural population, thanks to the activities they implement. 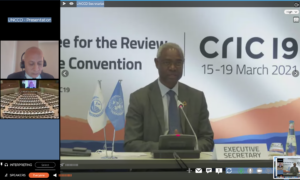 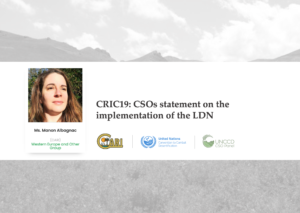 CSO comments and recommendations on the implementation of the LDN 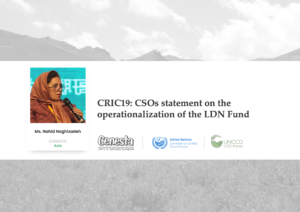