According to a new study, humankind is consuming the resources of the planet in increasingly destructive volumes. The day when all the resources of the planet could be renewed during one year is in the past, the yearly resources having been consumed by 1 August, that is, after that day this year’s consumption exceeds the nature’s capacity to regenerate. Therefore, by 31 December, according to the calculations of the NGO “Global Footprint Network”, we will live “in debt” and will be consuming resources of future generations. The Earth Overshoot Day refers to the situation in the entire world, but there are very large differences between regions and countries, as an interactive map shows on the portal https://www.footprintnetwork.org/portal. Thus, if the entire Earth would be consuming resources like Moldova we will consumed resources for this year on November 15th. Too early by far, but still not so fast as many other countries do. Still we realize that even we have better results in this areas, they are due more to economic stagnation than to awareness and conscious behaviour of Moldovan people in respect to natural resources. There is still very much to be done in this respect both in Moldova and everywhere on the planet.

Various solutions are being developed to reverse this trend and an important role in their realization is played by civil society organizations. Some of these solutions were discussed at the Sustainable Development Summit held in New York in September 2015, which has adopted the Agenda 2030 for Sustainable Development. The Republic of Moldova has joined the leaders of the 192 UN member states and has committed to reach 106 targets for a better life by 2030. Since it is very difficult for all targets to be achieved, each country prioritizes its targets be achieved by correlating with the reform agenda and the expectations of society. This year in Moldova the Concept Note on the vision of the National Development Strategy (NDS) “Moldova 2030” was developed. The draft document was discussed within the working group, which includes an NGO BIOS representative. Then, upon incorporation of received the comments received, the NDS “Moldova 2030” was finalized.

NGO BIOS has submitted comments and recommendations for the improvement of both the Concept Note on the vision of the NDS “Moldova 2030” and the NDS “Moldova 2030” draft document. We are happy that some of our comments were believed to be significant and have been included in the document. Thus, among others, our proposal was accepted to include ODD 15 for achieving Land Degradation Neutrality (LDN) as well as biodiversity conservation in the List of Priority Sustainable Development Objectives (ODD).

Organic farming is part of the Action Plan for the Implementation of International Conventions to which the Republic of Moldova is a party, such as UNCCD, UNFCCC, CBD. In order to carry out activities in this area, broad knowledge of organic farming is needed both among farmers and consumers, as well as decision-makers. This knowledge would enable decision makers, farmers and rural residents to make informed decisions and think long run.

Towards this end, NGO BIOS in January-April 2018 has developed an Organic Farming Handbook, named Organic Farming System and conducted two training courses for trainers from all the districts of Moldova. The trainers are to further train the farmers from rural communities of the Republic of Moldova. These activities were carried out under the Rural Inclusion Program, financed by the Global Environment Facility and implemented by IFAD Consolidated Implementation Unit.

NGO BIOS has updated and sent to WOCAT four sustainable land management practices in Moldova in June-July this year, which could be tested in other countries as well.

NGO BIOS in common with other relevant actors developed National Engagement Strategy (NES), supported by International Land Coalition for promoting people centered land governance http://bios.ong.md/wp-content/uploads/2018/06/NES_Moldova.pdf . This is in itself a framework for identifying the main priority areas where the actors involved see opportunities to catalyze change, either at policy formulation or at implementation level. This implies the involvement of key – and often diverse – actors who unite and build the foundation of a common strategy based on the complementarity of their capacities and reciprocity. The establishment of a multi-stakeholder national platform speeds up the likelihood of achieving results, increases the efficiency and effectiveness of action, and provides a constructive space for action where more activities can be coordinated. Currently NES is implemented by members of NES Platform. Various practices in sustainable land management were discussed at five workshops for young people and women organized by the National Engagement Strategy (NES) Implementation Platform members: NGO BIOS in partnership with the National Farmers Federation of Moldova (NFFM) in August, supported by the International Land Coalition (ILC) and We EFFECT. Within NES, multiple activities are planned and Platform members engage in their realization. Thus, FAO Moldova and Moldsilva (Forestry) Agency will cooperate in the field of policy improvement, LDN, sustainable land management, etc.

One of our core activities is to promote participation of civil society in various activities. Thus, NGO BIOS is organizing the National Participation Day for the Civil Society in the Republic of Moldova of the EU Strategy for the Danube Region jointly with the National Coordinator of the EU Strategy on the Danube Region, the Ministry of Agriculture, Regional Development and Environment, the EU Delegation in Moldova, the Danube Civil Society Forum, the Priority Area 10 responsible for the civil society and the participation in the EUSDR, the City of Vienna, annually for the last three years. The events are supported by the Baden-Württemberg Stiftung and Austrian Development Agency with Austrian Development and Cooperation Funds. Environment protection, including SLM, is one of the main pillars of EUSDR. During the event we discuss various topics, including best practices in SLM in different regions.

In the coming months, BIOS will continue to promote the integration of environmental considerations into sectoral policies and encourage the implementation of UNCCD provisions, in particular LDN and land tenure.

Summary report of CSO participation in the CRIC 17 of UNCCD 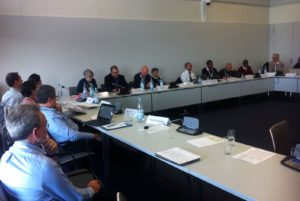 CSO observer in the eighth meeting of the UNCCD SPI